Life in the slow lane

When I named my big poison pill Don Quijote I really didn't think much, let alone that there is some irony to my choice of names. This wonder-pill is supposed to kill cancer cells by attacking the nucleus, while my other pill Sancho Panza blocks the estrogen that cancer cells like to "eat."
Well, as you may know, Don Quijote was a knight of dubious mental fitness in a popular Spanish legend. There's more to the story than this, but basically he set off to kill giants in the Spanish countryside, trouble being that he ended up hallucinating that the many windmills that abound in the llanos were indeed giants. So he engaged the windmills with his lance and his battles didn't end up very well.

"My" Don Quijote, the wonder-pill, is supposed to kill cancer cell nuclei, and it is very good at it. Trouble is, it also kills other fast reproducing cells, like most chemotherapy treatments. These include all kind of Maria-cells, blood cells and hair cells and some others.
The whole thing is weird because I posted these pictures on the refrigerator so the stupid pill would know exactly who to go after. I meaaaaan, the difference is obvious! No?

My wonder pill is making my blood counts low so I have to correct for that. While I patiently await some blood-boosting stuff to come in the mail (delayed due to another tiny insurance glitch), I am living life in the very slow lane.

Hey, the slow lane is pretty!

I try to cope with that as best I can but I really want to be, and often imagine myself, running up my beloved mountain...it's just that my body won't come along right now. Still walking though, watching my immune system like a hawk because right now I don't have a lot of "lances and shields" to defend myself. And so the battle continues...

So my new walking pace allows me to enjoy things in a whole new way. Having been showered with beautiful day after beautiful day, I went to the park and got to watch the jackrabbits (desert hare) chasing each other; it was quite windy so the fair weather park goers were largely absent. 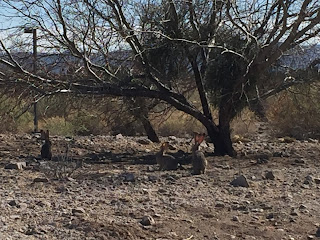 And just today, walking in my own neighborhood I stole a pic or two of a blooming almond tree, maybe peach? I think almond, we'll know soon enough! The bees sure like them blooms, they were buzzing all about. 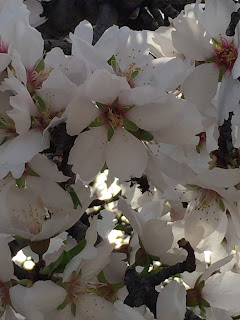 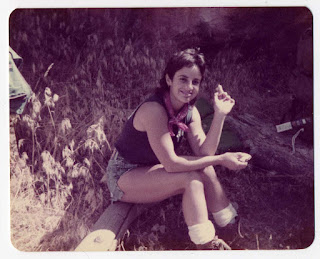